Tomorrow is a drag, man

Phillipa Fallon giving it her all in High School Confidential 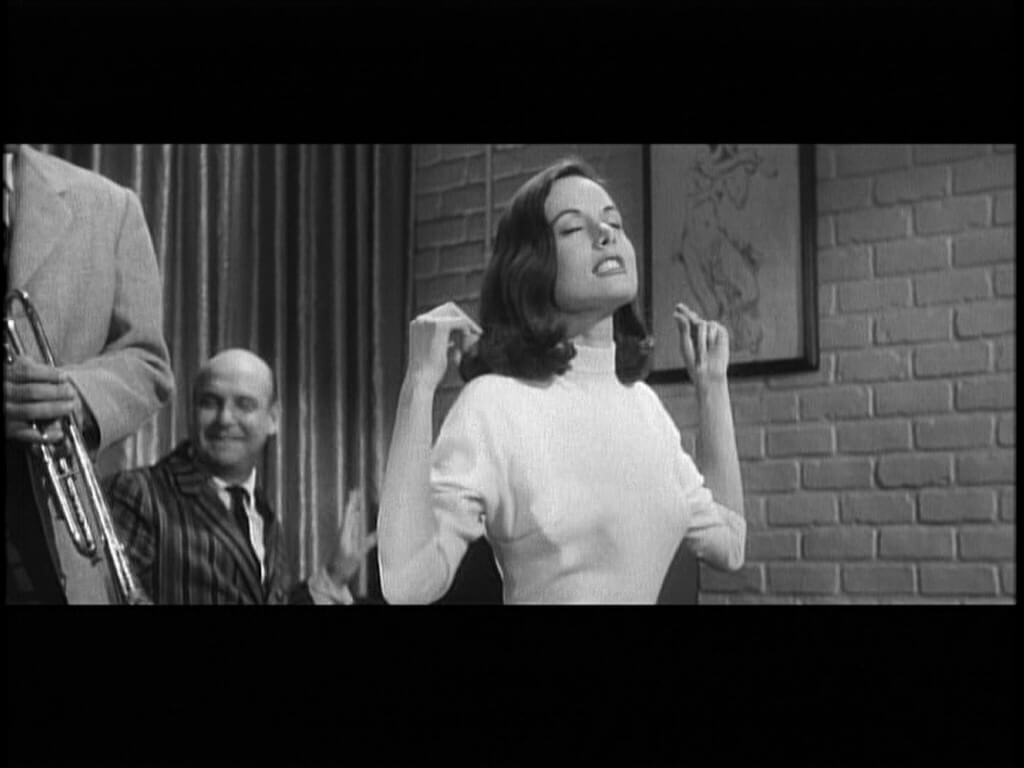 This is my first creation with Audacity, the free, open-source software for audio recording. It’s an homage to the ‘beat poetess’ poem from High School Confidential. A shout-out to Themfish on Freesound.org for the scratchy record sound in the background. Have a listen and then scroll down for the backstory.

High School Confidential is one of those 1950s B-movies that intended to show the dark underbelly of the Beat Generation to the nuclear age, but ended up being accidentally cool anyway. The ‘hip’ lingo and over-the-top, paranoid placement of marijuana into the same category of seriousness as heroin today is just dopey (pun intended). Scenes intended to show us the kids’ nihilism come off instead as more Beatnik than Beat Generation, ‘beatnik’ being the somewhat propagandistic combination of ‘Beat’ and ‘Sputnik’ to equate the movement to Godless Communism! In reality, the ‘Beat’ was a reference to both fatigue with the decadence of 1950s consumer culture (and I think an underlying American reality contrasted to the happy nuclear depictions of TV Land) and a nod to the Beatific, and its correlations with both Buddhism and Sainthood.

I’ve always enjoyed the Beatnik shtick as much if not more than the legit Beat Generation art. Movies like 1958’s Bell, Book, and Candle – which depicts Greenwich Village witches more or less as Beats – and old sci-fi classics like The Forbidden Planet, where Walter Pidgeon’s Dr. Mobius is a black-clad, egghead, Beatnik of the kind who thinks they can ‘reason with’ the monster, are more my thing. Leslie Nielson, in his straight-man days, plays the obligatory American superman who knows that monsters, like Communism, cannot be reasoned with. I dare any of you out there to plan a film night where you watch Airplane and see if, after Leslie Nielson’s antics, you can sit through Forbidden Planet with a straight face (and if you’ve never seen Forbidden Planet, I demand you do it at your soonest convenience, as it is one of the best early sci-fi flicks ever).

I’m not strange in digging the stereotype as much as the reality. The Beats are popularly perceived as a somewhat nostalgic if goofy phenomenon. I suspect this is because the Beats were so 1950s normal-looking and –behaving (at least publicly) compared to the hippies who came after, and who were an outgrowth of the Beats (just Google Alan Ginsberg’s pictures and watch them morph from short-haired, slightly scruffy dude to something somewhat batty). They’re clean-cut if scruffy, clad in workshirts and still Brylcreemed like many other regular men on the streets (check out the famous John Cohen pic in the NYT).

Having read The Dharma Bums last summer during our trip through the US, I was struck by, at least, Kerouac’s earnestness and honesty, a real desire to construct a meaningful life in the post-WWII world. The Beats seem to have been less counter-cultural than a reluctantly willing branch of popular culture, up against the norms of a newly-minted Western military empire. It seems to me, as usual, that it was the elites in American society that invented the ‘Beatnik’ to demonstrate to the Greatest Generation what they shouldn’t be. A look at an archival film of Greenwich Village in 1961 shows a pretty integral and normal ‘scene’ that I, for one, wouldn’t mind being a part of.

But I digress. The highlight of High School Confidential for me has always been Phillipa Fallon’s cameo as the ‘beat poetess’ who gets up and does a nihilistic poem meant to demonstrate the moribund lifestyle of the affluent pot addicts of Whereeveritis USA. Alas, this also seems to have been the highlight of Fallon’s movie career. She’s the epitome of disinterested, cynical reefer chick as she gets up and spiels off her vision of America’s future. It’s the Square scene’s notion of Beatnik cool, flat and indifferent, and is such a stereotype of the mainstream perception of the Beats that it has become nostalgic and cool in its own right. Fallon’s rendition is so cool that it almost bridges the gap between Beatnik and the Beat Generation, though not quite.

As my first experiment with using Audacity, I took the audio from that scene of High School Confidential (it’s all over YouTube) and inserted my voice in place of Fallon’s. I took her flat rendition and tried to give it a little more emotional depth. What I initially took to be cute but empty fluff words that’d make a cool-sounding voice-characterization sample turned out to be more profound than I expected after I recited the words about 20 times, trying to get the tone right. It’s a credit to Mel Welles writing that the words have a strangely appropriate correlation to today’s zeitgeist. I think a lot of people, especially in the midst of the opioid epidemic and similar social disasters throughout the Western world, might feel, indeed, that tomorrow is draaagggsssvillle, man

For your listening pleasure, I’m also including what was initially going to be my first recording, a redo of my classic answering machine message (a shout-out to Robinhood76 on Freesound.org for the Beep) featuring the same ‘jazz voice’ used in the Fallon bit above, with a bit of Miles Davis’s Blues by Five in the background (part of an OUTSTANDING record called Cookin’ with Miles Davis that I’d recommend to any cats or cool chicks out there lookin’ to groooove.

Incidentally, the Beat Generation DID have a dark side, and you can read more about it in this interview with Caleb Carr, son of Beat Lucien Carr, on Literary Hub. If you’d like to hear more of my work, check out The Weird Sisters and Deny Your God.

Work is not just a job.

All Rights Reserved, taken by Atticus Mullikin and Nathalie Ummels